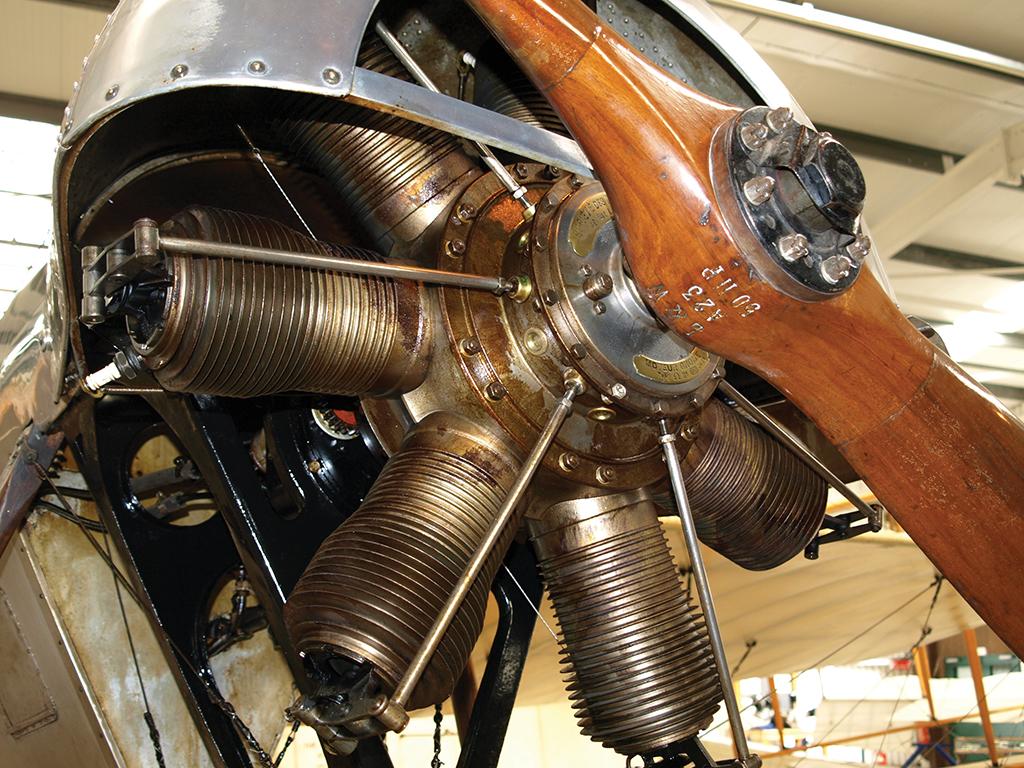 Early engine makers developed a method of providing adequate cooling air by designing a configuration in which the crankshaft was fixed to the airframe while the entire crankcase and cylinders rotated. The concept was pioneered by French automotive engineers Louis and Laurent Seguin, who founded the “Société des Moteurs Gnome” in Gennevilliers, near Paris, in 1905. Following a merger with the “Société des Moteurs Le Rhône” in 1912, the “Gnome et Rhône” rotary engines, like the one pictured, became ubiquitous during World War I, powering both Allied and German aircraft. 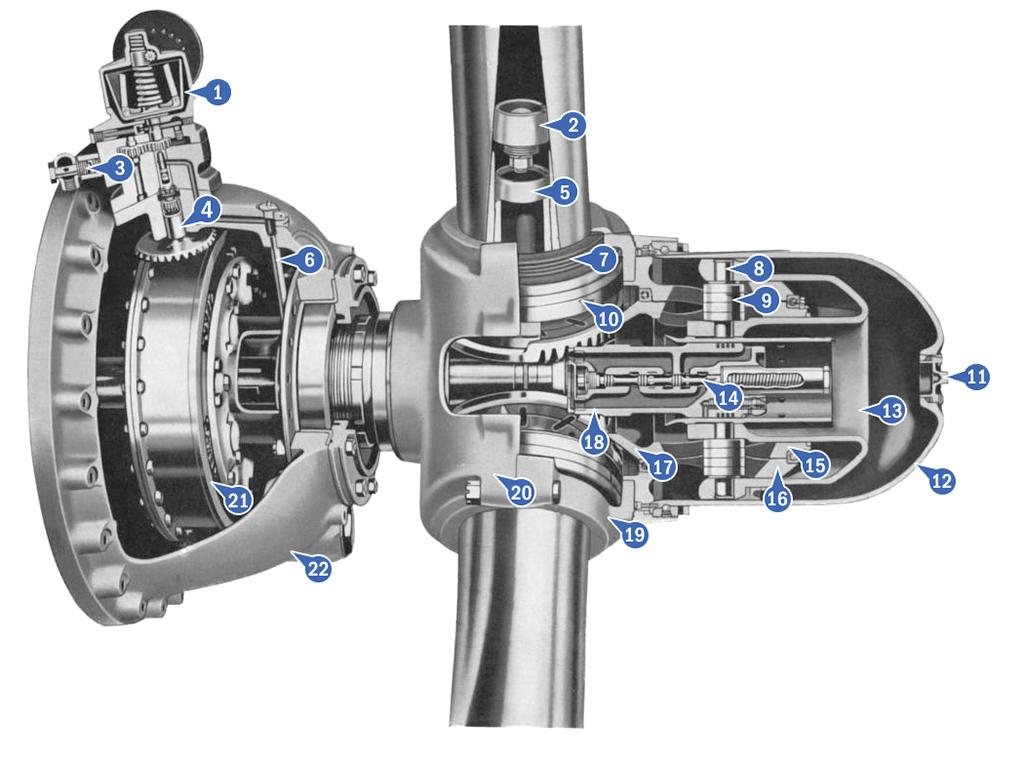 The ability to alter the pitch of the propeller blade in flight enabled better climb performance and greater engine efficiency. Hamilton Standard developed the first practical system to change the blade angle in flight; it was introduced into commercial service on the Douglas DC-1 in 1933. Further development led to both electrically- and hydraulically-actuated variable-pitch systems as well as the eventual development of the constant-speed controllable pitch propeller in which a governor would automatically advance pitch with increased speed. Key components of the system are: 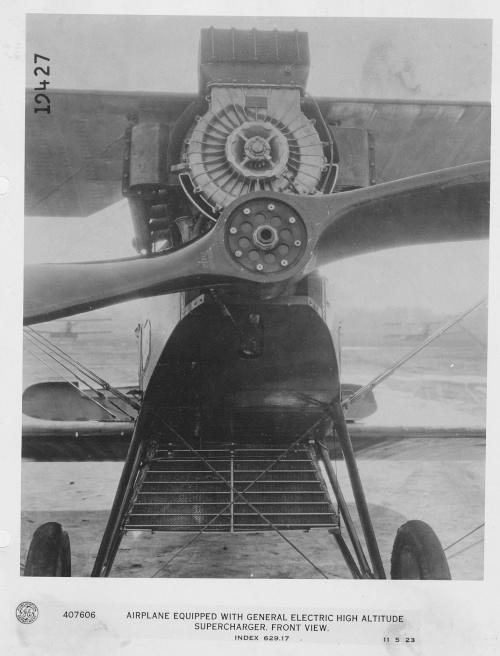 Researchers toward the end of World War I discovered that the power of a piston engine at sea level could be significantly boosted by pre-compressing air before it was ingested into the engine, usually by a centrifugal compressor. The system also compensated for the effect of decreasing air density with altitude, thereby preventing power levels from declining as the aircraft climbed. An early Liberty engine is shown fitted with a basic turbosupercharger, similar to the one tested in 1918 by a General Electric team led by Sanford Moss. 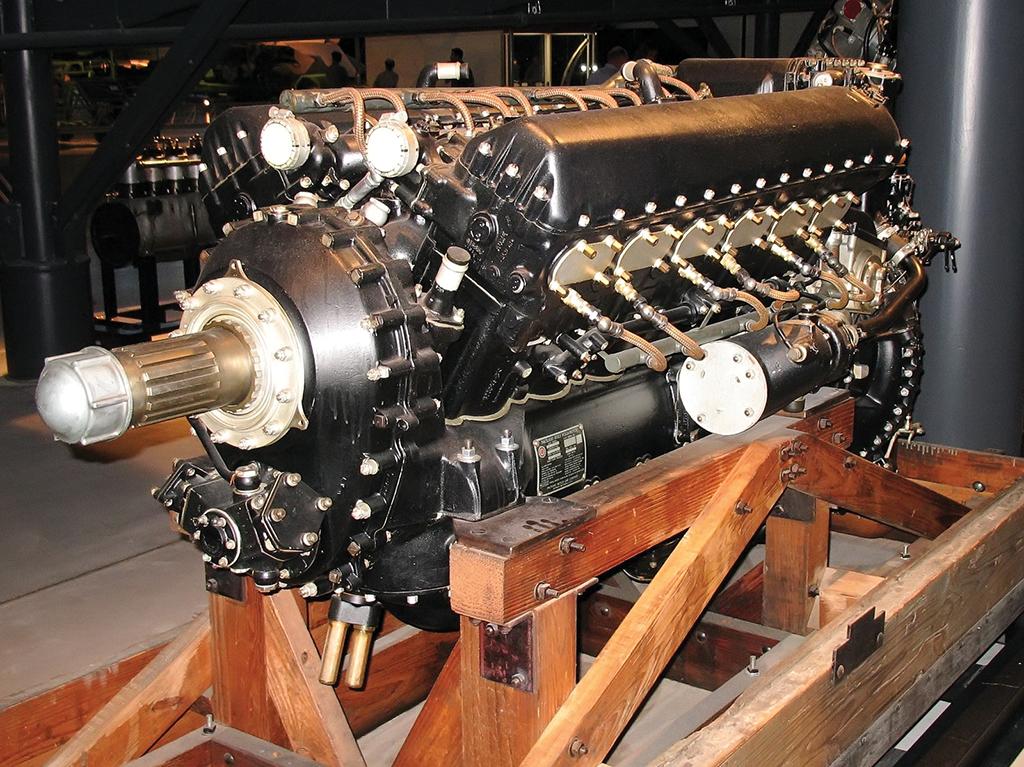 For lower drag and higher speed, some piston engines were configured with cylinders arranged in a row, rather than radially. Cooling by air was a challenge, however, so designers opted for a liquid-cooling system. The development of powerful liquid-cooled piston engines reached its zenith in the 1940s when powerplants such as this Rolls-Royce Merlin were produced in the thousands to power fighters, bombers and transports during World War II. 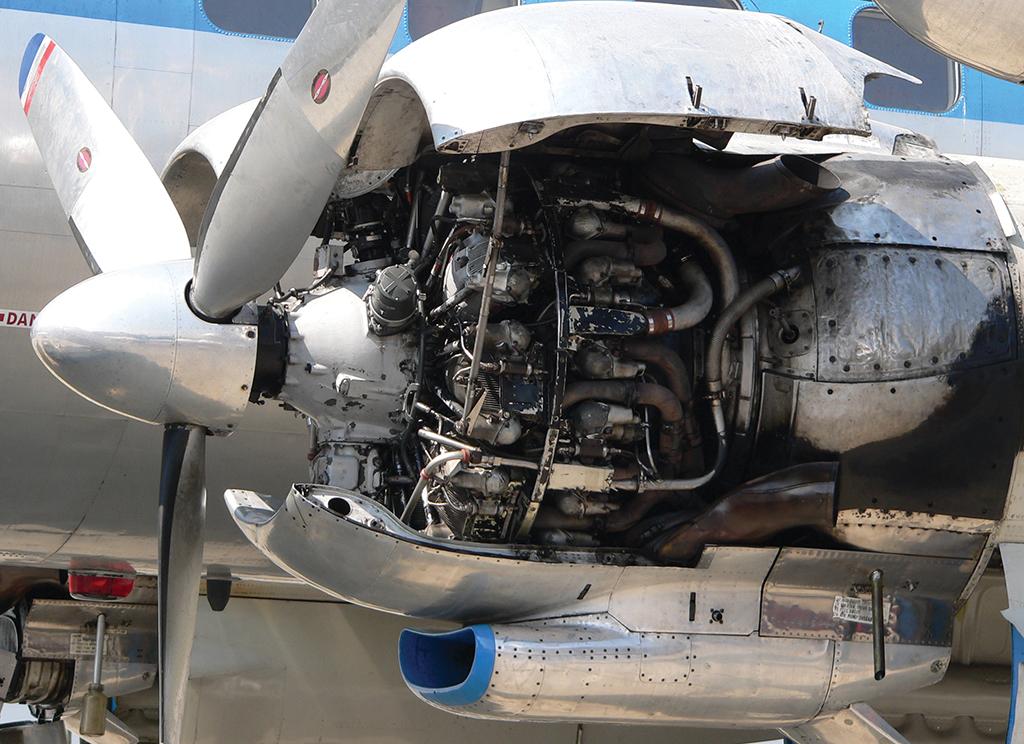 Post-World War II, Pratt & Whitney developed the first twin spool, or two-shaft, turbojet in which two sets of compressors and turbines could be mounted concentrically in the same engine. The resulting J57 became the gold standard for the era, powering a wide variety of U.S. military aircraft from Boeing's B-52 and KC-135 to McDonnell's F-101, Convair's F-102 and various naval aircraft, including the Douglas F4D and F5D. The J57 also enabled the North American YF-100 to become the first combat aircraft to achieve sustained level supersonic flight in 1953. A commercial derivative, the JT3, also provided Pratt with its entree to the commercial market—providing power for first-generation Boeing 707 and Douglas DC-8 families. A British engine, the Bristol (later Rolls-Royce) Olympus was also configured around a two-spool design and, following an initial run in 1950, powered the Vulcan bomber and, in association with Snecma, the Anglo-French Concorde supersonic transport. 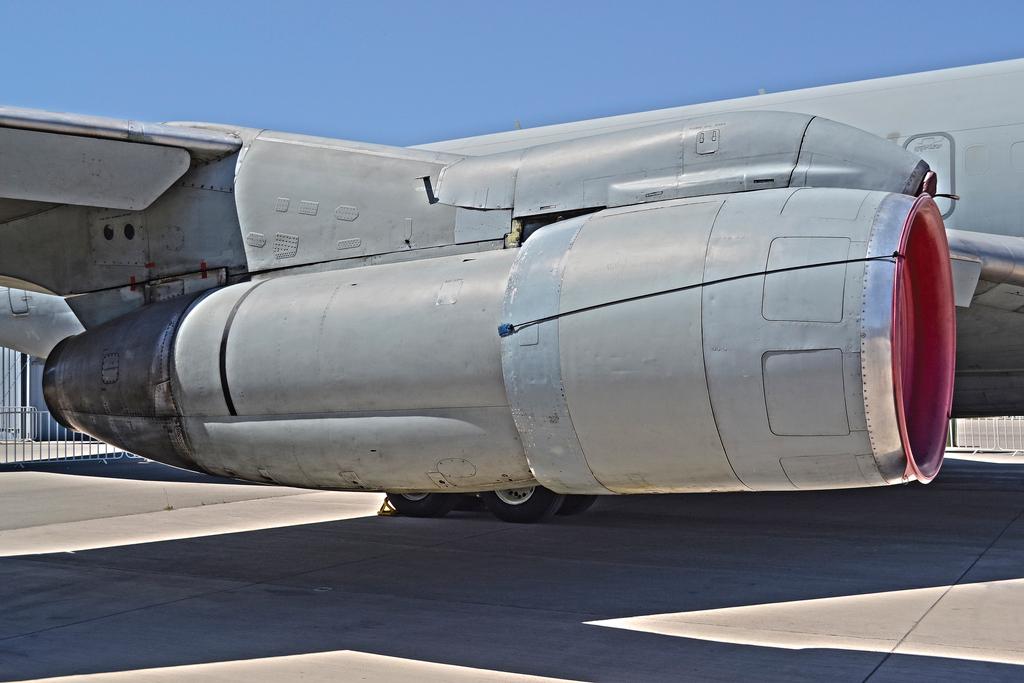 The search for improved fuel efficiency and higher thrust in the 1950s drove manufacturers to study a new form of engine that divided the flow into a bypass stream and a core stream. The Rolls-Royce Conway was the first bypass engine to enter service on the Boeing 707 in 1960, but it was Pratt & Whitney’s JT3D (pictured) that had the most success. General Electric produced the CJ805-23B, the first U.S. turbofan, by adding a fan stage to the aft section of a derivative of the military J79 engine, but this enjoyed only limited success; it was installed only on the Convair 990. 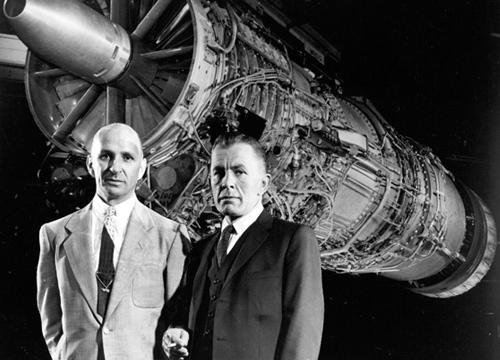 Early jet engines were prone to compressor stall and other operating problems at low speeds, particularly during acceleration. A novel solution, devised by GE engineer Gerhard Neumann (left, with J79 co-designer Neil Burgess) for the J79 turbojet in 1954, was an automatic system that altered the angle of moveable inlet guide vanes and compressor stators as engine speed rose. The breakthrough made flights possible at Mach 2 and above and laid the foundation for modern high-bypass turbofans. 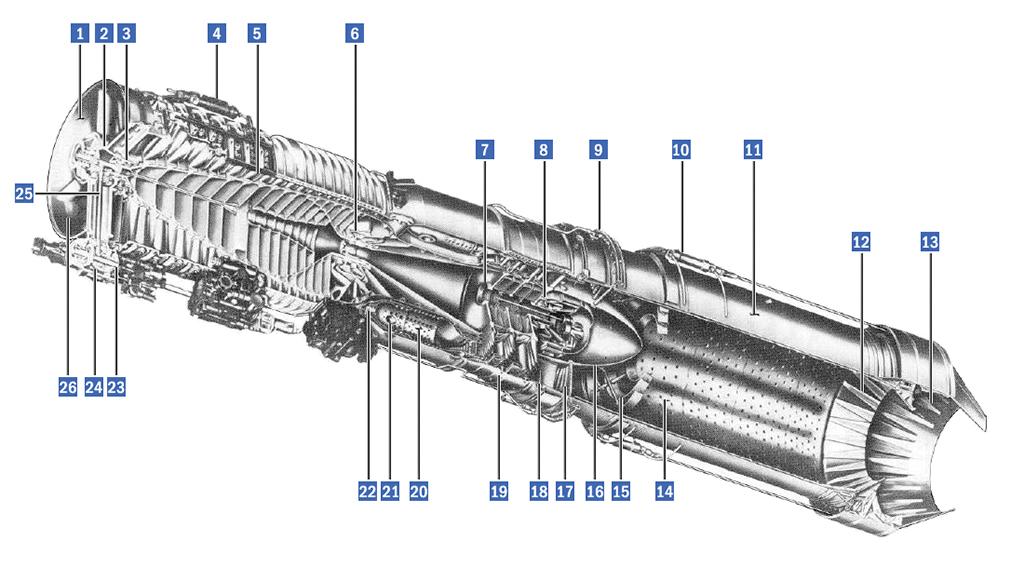 More than 17,000 J79s were built over a 30-year span for use on a variety of combat aircraft ranging from Lockheed's F-104 Starfighter and F-4 Phantom to Convair's B-58 Hustler and Israel Aerospace Industries Kfir. 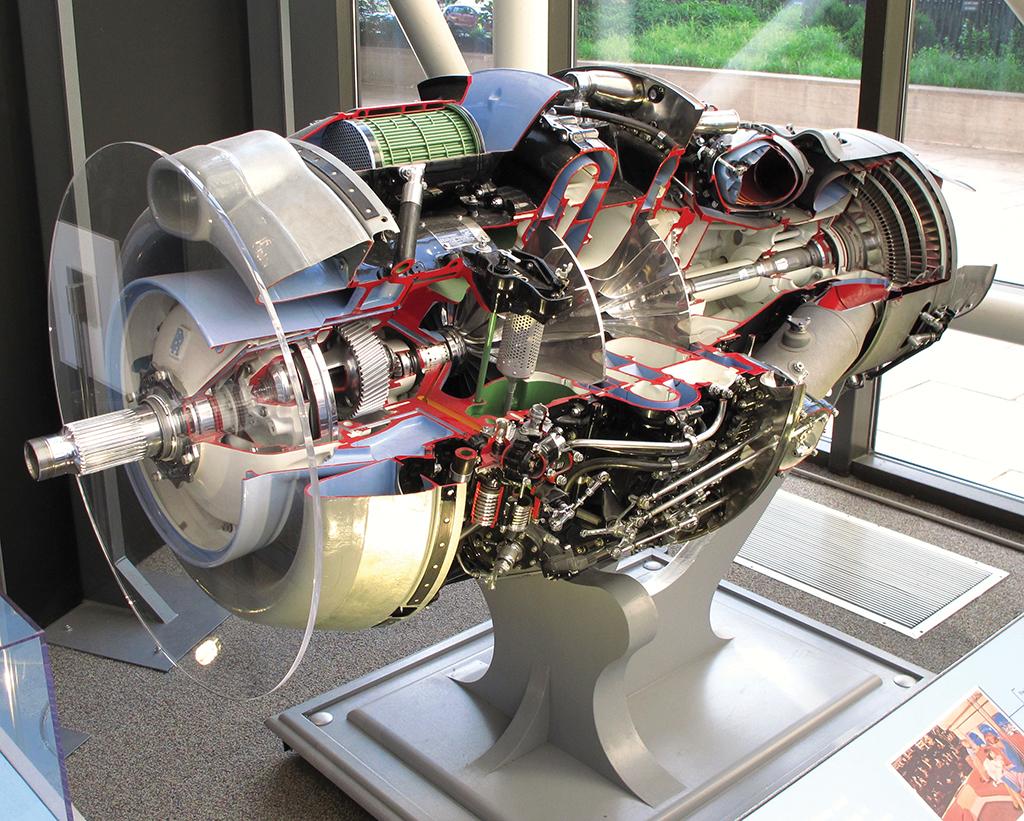 Turboprops harness the energy of the exhaust stream of the gas turbine and convert it into shaft power either by a gearbox attached directly to the compressor, or by a separate free turbine driving a co-axial shaft into a reduction gearbox. A turboshaft is similar to a turboprop but provides power to a transmission unit connected to a rotor rather than a propeller.  Notable turboprop successes include engine such as this Rolls-Royce Dart. 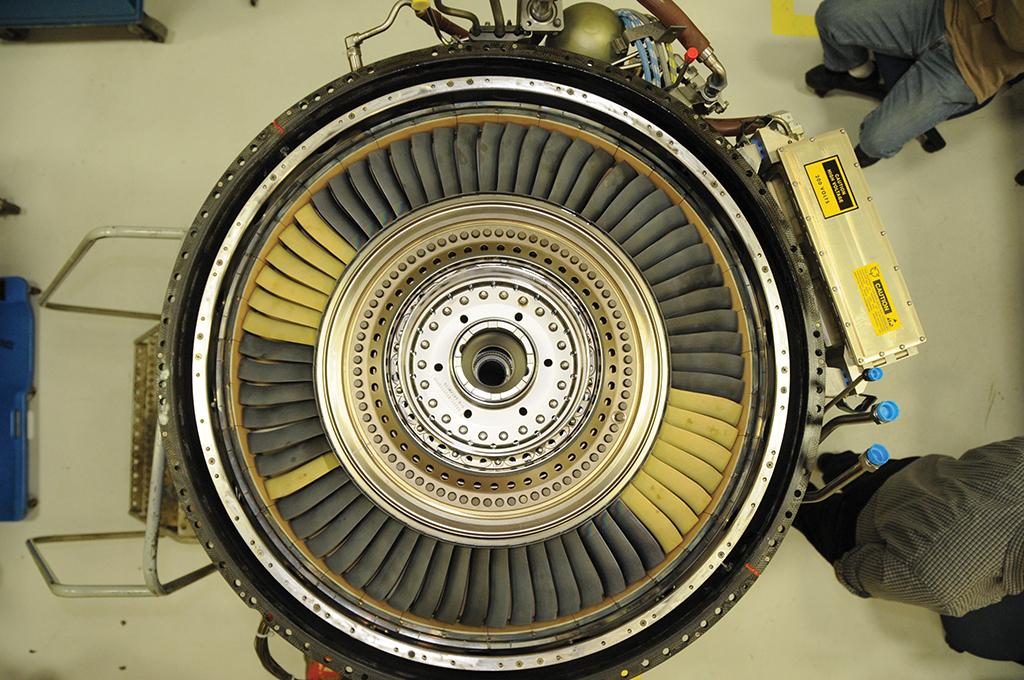 General Electric has successfully validated the temperature capabilities and durability of low-pressure turbine blades made from lightweight ceramic matrix composites (CMC) in an F414 turbofan (seen in yellow), opening the door toward greater use of the advanced material in future combat engines for sixth-generation fighter aircraft and other applications. 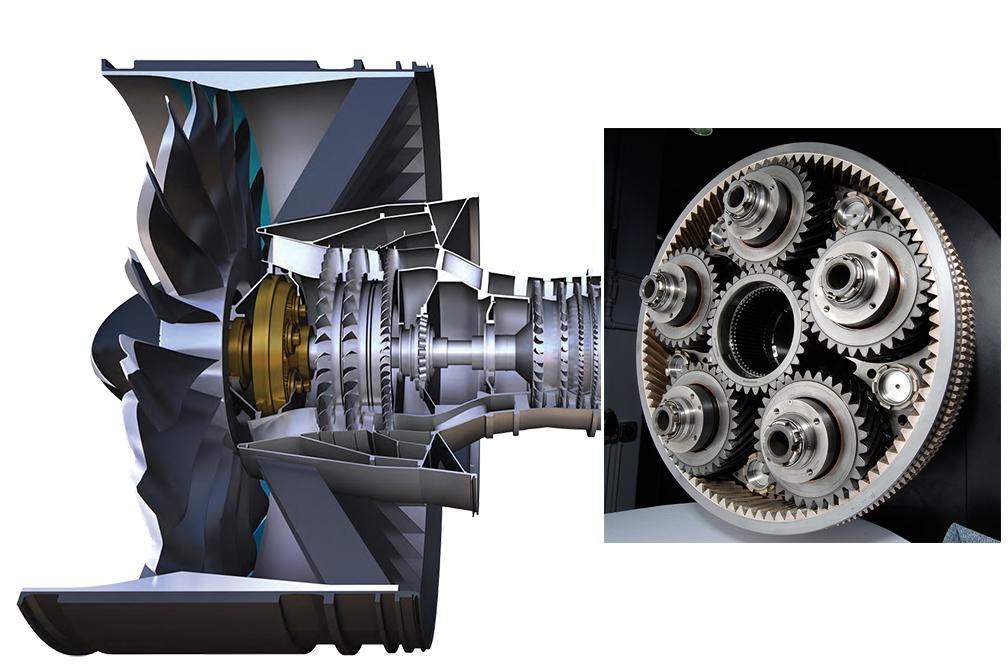 Pratt & Whitney has developed a family of geared turbofans that link the low-pressure turbine and fan via a gear system. The concept, which was previously successfully tried on lower-thrust engines such as the Honeywell TFE731 and LF502 families, enables the engine to be more efficient by allowing the fan to run more slowly and the low-pressure compressor and turbine to run faster. Pratt’s PW1000G geared fan (above) currently includes three main members and five applications, but is expected to grow in both numbers and thrust range. Rolls-Royce also plans to adopt the concept for its future UltraFan high-thrust engine. 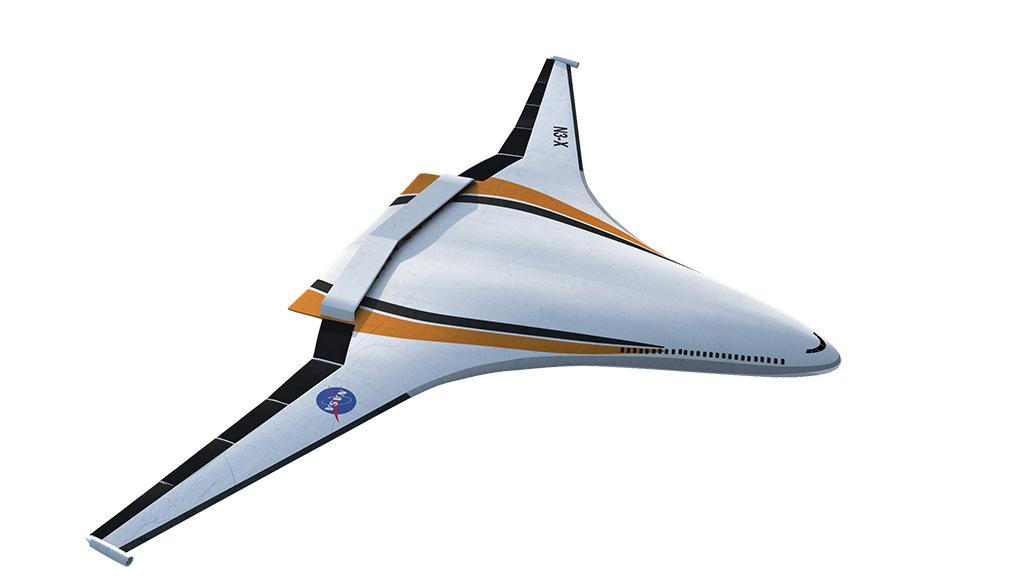 NASA is studying hybrid turboelectric-powered aircraft. The agency anticipates that megawatt-class electric motors will be ready within 10 years to power a turboelectric 50-seat aircraft, and—within 20 years—a 100-passenger regional aircraft. NASA plans to demonstrate both conventional non-cryogenic and cryogenic superconducting motors as well as power electronics for both hybrid and distributed electric propulsion systems.

Read more about the development of aero engines (subscribers):

Milestones And Masters Of Propulsion Technology

Guy is a Senior Editor for Aviation Week, based in Los Angeles. Before joining Aviation Week in 2007, Guy was with Flight International, first as technical editor based in the U.K. and most recently as U.S. West Coast editor. Before joining Flight, he was London correspondent for Interavia, part of Jane's Information Group.