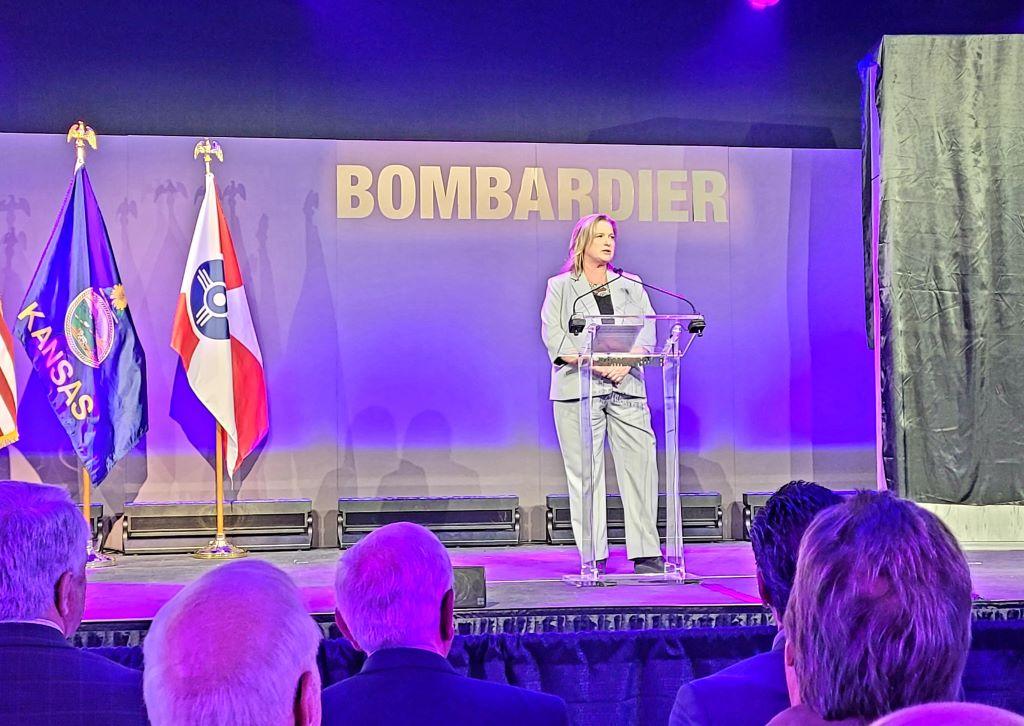 Bombardier announced the news that it has designated the Wichita facility as its U.S. headquarters at a special event April 19. Tonya Suddeth, former vice president of operations of the site, has been named head of U.S. Strategy. Suddeth served as Master of Ceremonies at the event. Credit: Molly McMillin 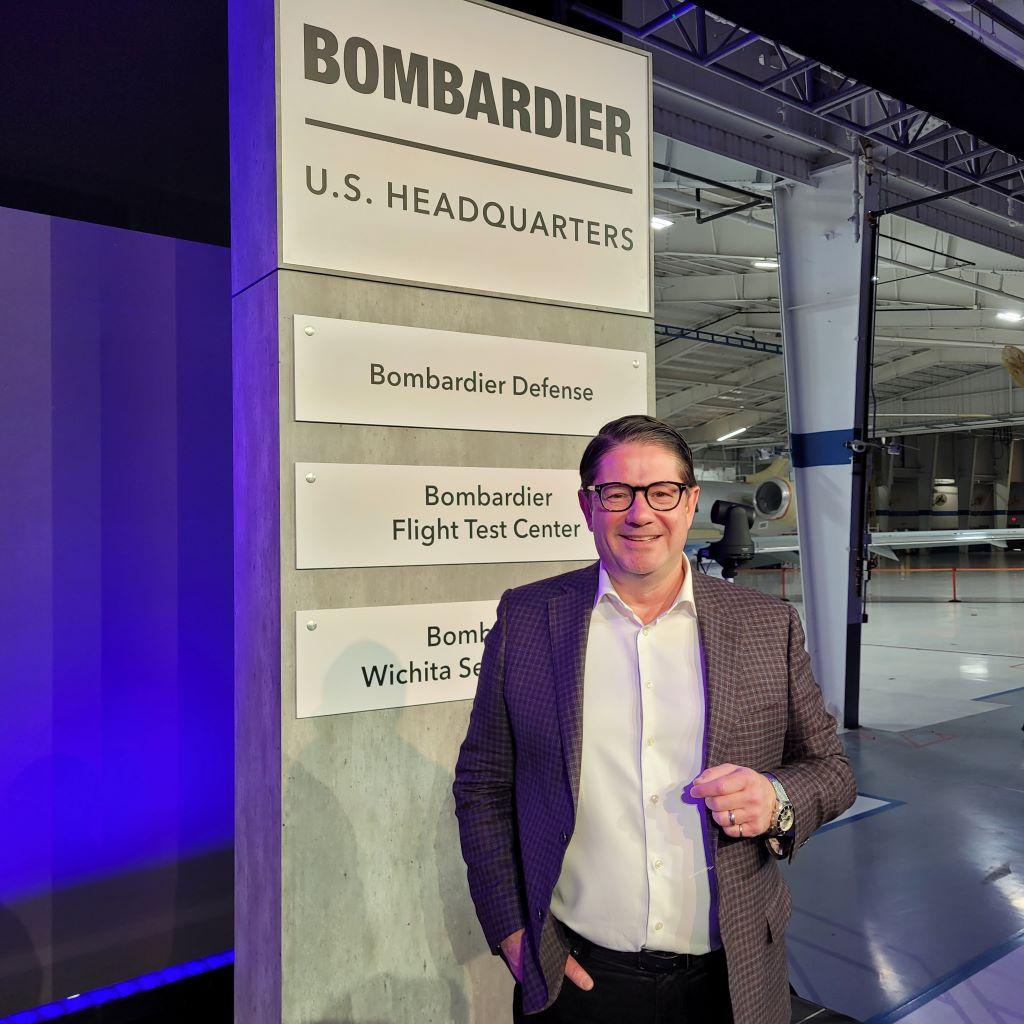 Wichita was the obvious choice for the home of Bombardier’s U.S headquarters, Eric Martel, Bombardier president and CEO, says. “For more than 60 years, the established skills and expertise from the Air Capital of the World is second to none.” Credit: Molly McMillin 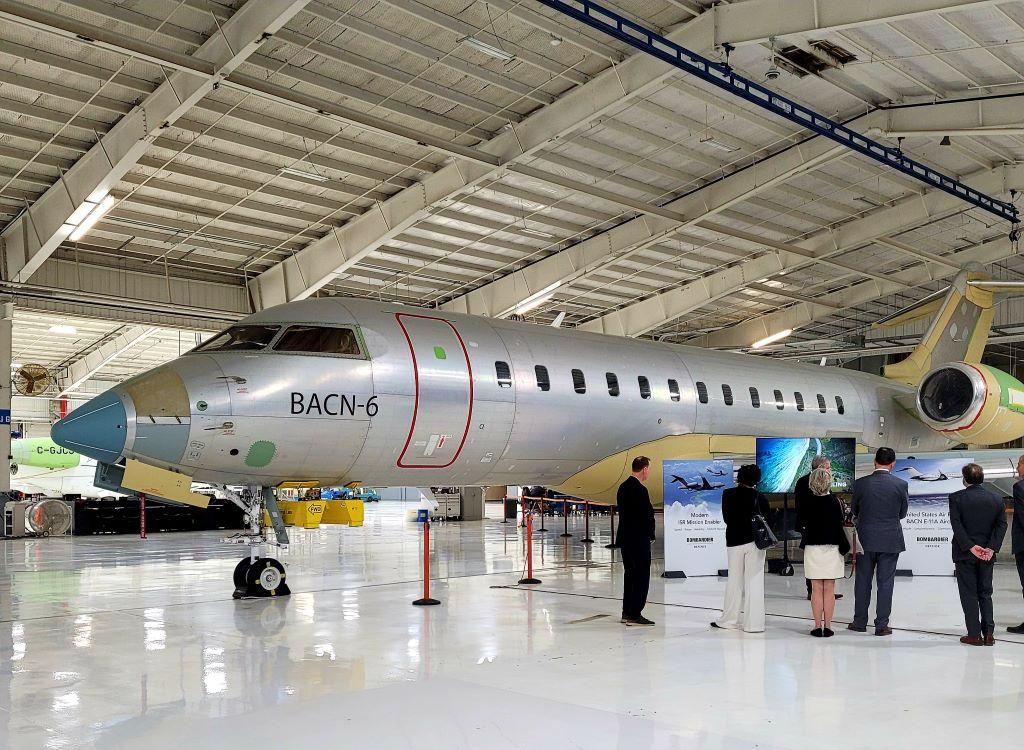 Bombardier has renamed its Specialized Aircraft division in Wichita to Bombardier Defense with the defense market a key area of growth for the company. In Wichita, Bombardier is converting Global 6000 business jets in support of the Battlefield Airborne Communications Node (BACN) program. Bombardier confirmed additional firm orders for the modified aircraft as part of a potential $465 million order from the Air Force. The BACN platform offers a communications hub, allowing soldiers on the ground, pilots in the air and commanders at a command center to communicate with one another in real-time, officials say. Credit: Molly McMillin 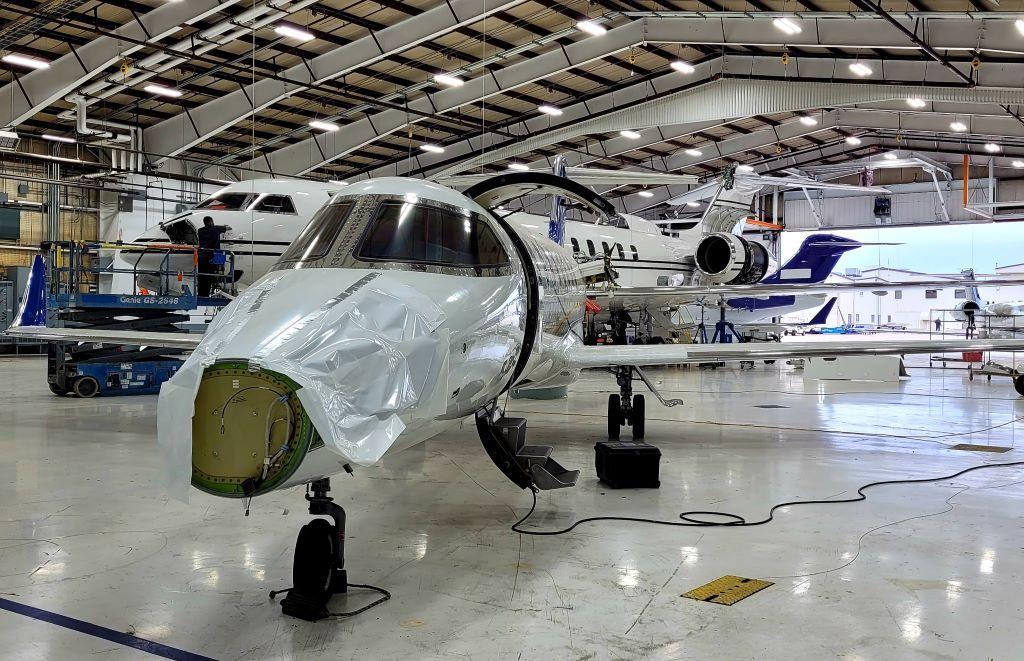 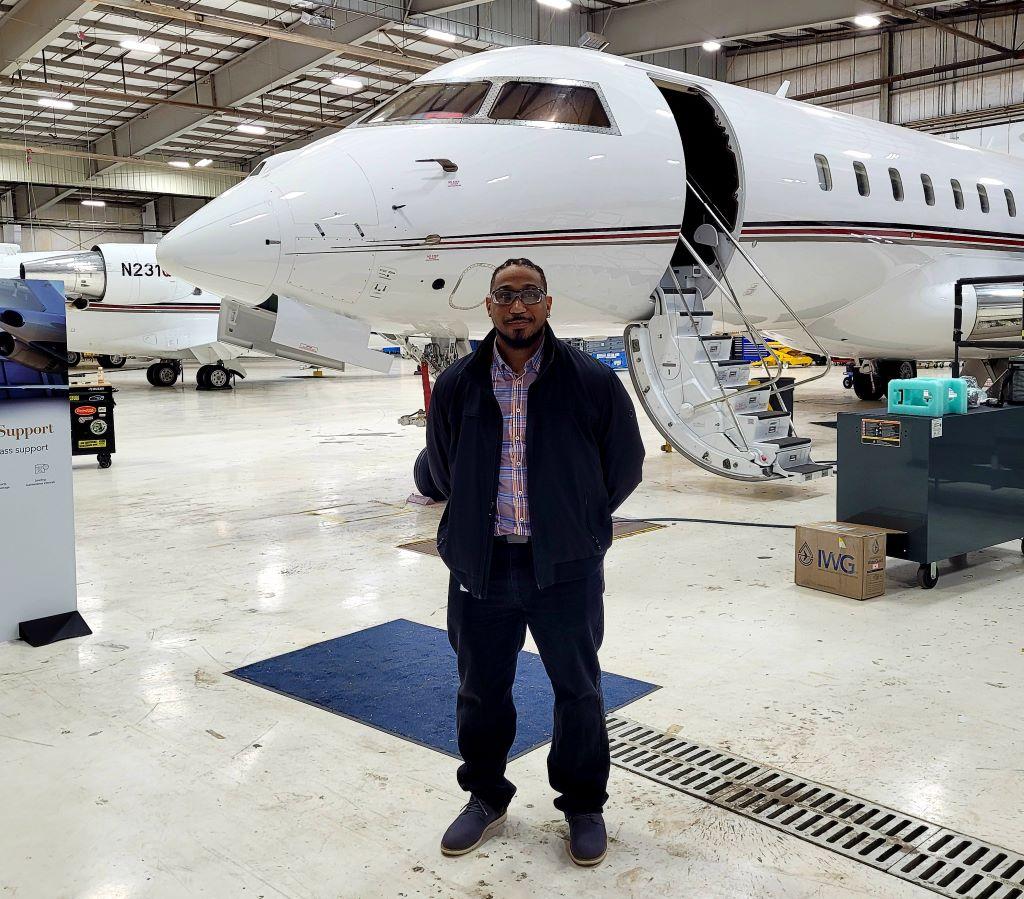 Wichita’s Bombardier Service Center has increased its capabilities, such as the addition of a component repair operation, to cut aircraft downtime, says Josiah Garth, Bombardier general supervisor. Some technicians have migrated to the service center from the Learjet 75 production line following the halt of Learjet production. Garth works inside the hangar that services NetJets' fleet of Bombardier jets. Credit: Molly McMillin 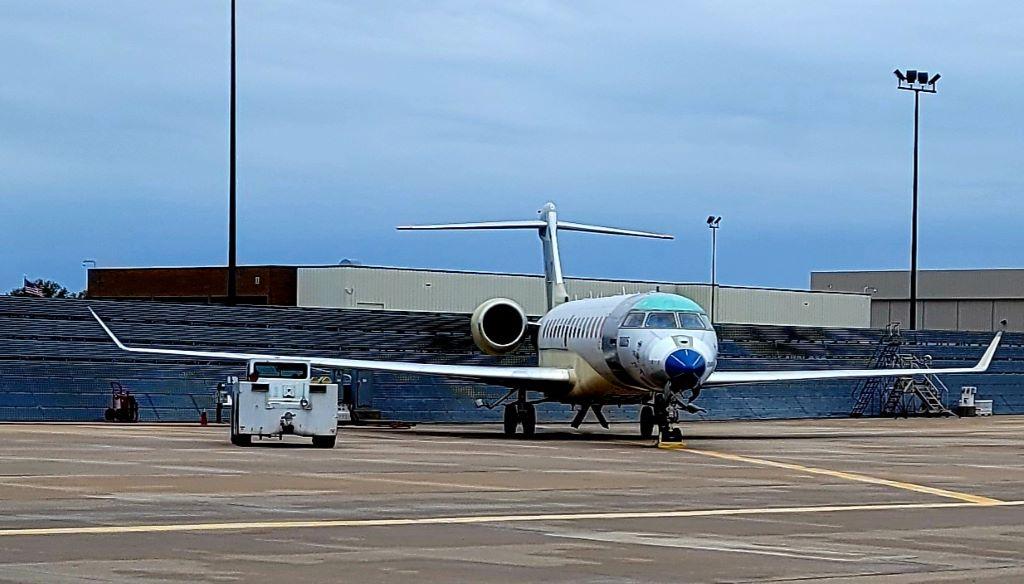 Bombardier’s flight test center, based in Wichita, otherwise known as BFTC, conducts a busy test schedule. Over the past 30 years, it has completed more than 30 new and major derivative flight-test programs. Shown is the first of five Global 7500 flight test aircraft, the only test aircraft that is active today. A second could be brought into service if needed. Bombardier retains the aircraft to test Global 7500 upgrades and improvements to the jet. The company recently delivered its 100th Global 7500, so there has been a significant amount of data gathered from the aircraft to date, officials say. Credit: Molly McMillin 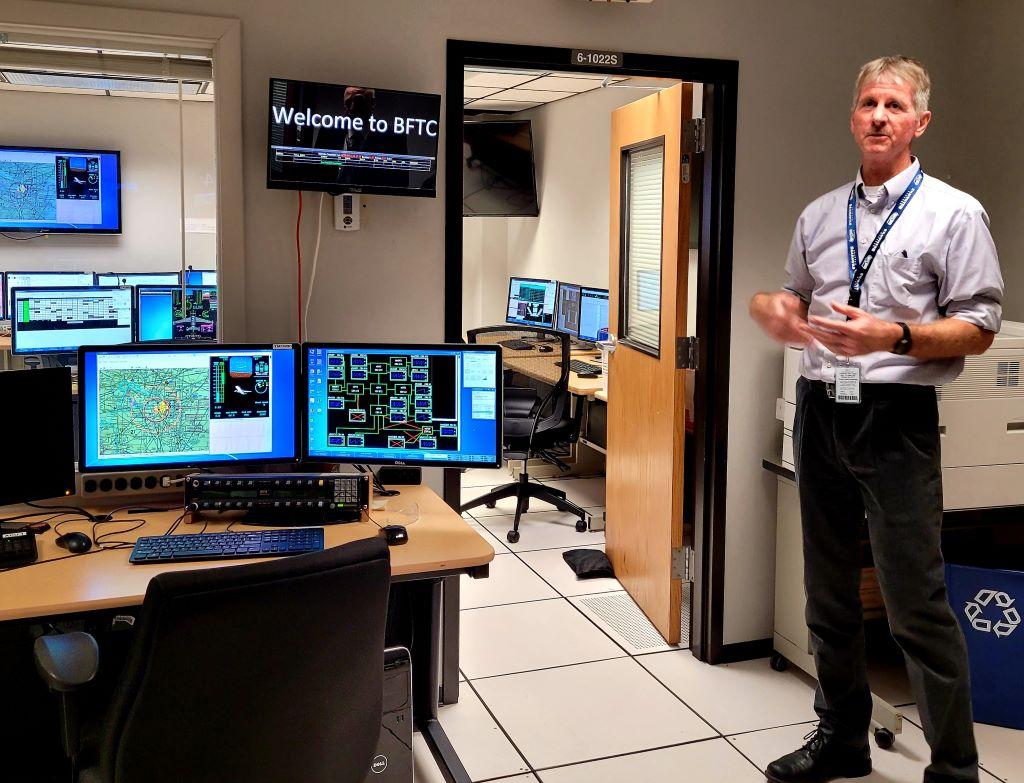 Bombardier’s flight test center measures and records flight test parameters, including 18,000 different parameters on the Global 7500 test aircraft. “It’s all there if we need it,” Paul Thill, Bombardier Flight Test Center manager of instrumentation and data services, says of the data. “That’s pretty typical these days of our later airplanes.” A flight test engineer on the aircraft inspects the data in real time to ensure safety and that tests are completed as planned. The data is collected and transmitted back to the ground. The same information shown on screens on the ground is available inside the aircraft when flying. Credit: Molly McMillin 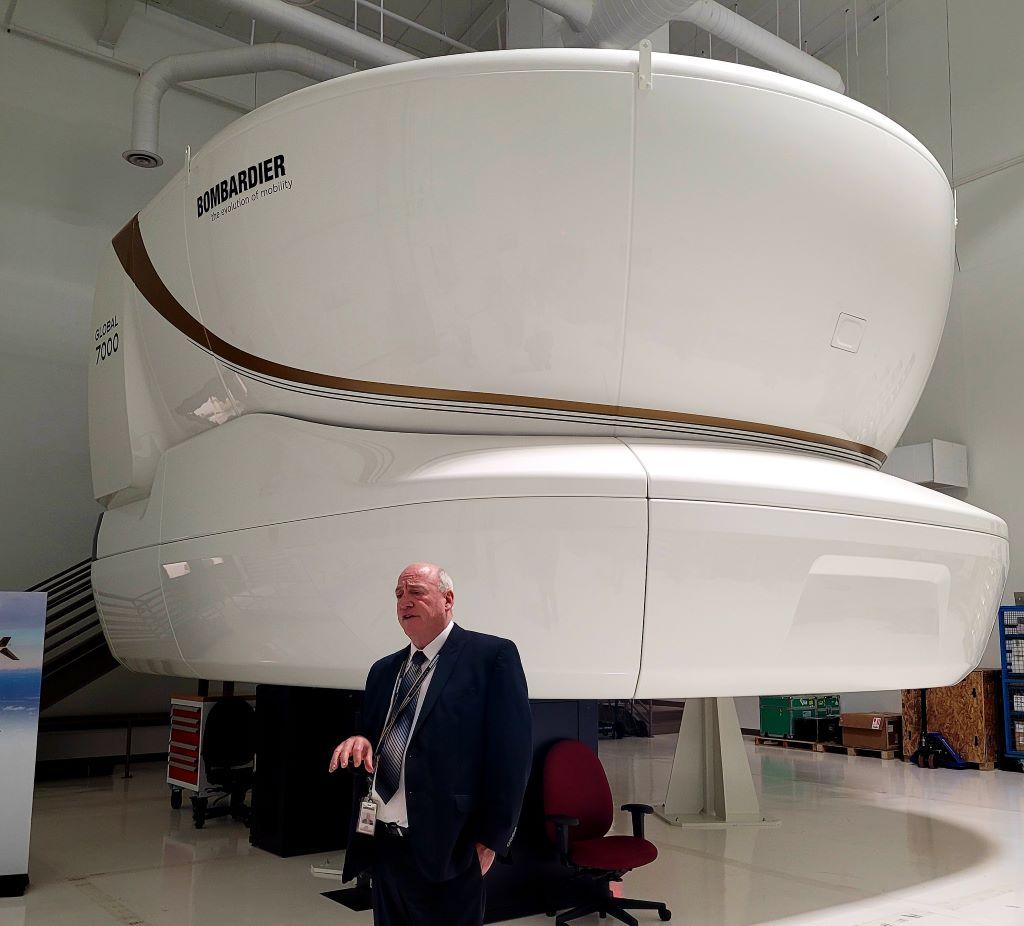 Bombardier’s full-flight simulator of the Global 7500 in its Flight Test Center includes the same attributes of simulators used to train pilots, except that Bombardier can update the avionics or software at a much faster pace, officials say. Flight test pilots for the Global 7500 flew the simulator before flying the test aircraft. Almost every test performed on the Global 7500 was flown first on the simulator in the interest of safety, says Tom Bisges, Bombardier vice president of product development engineering. Credit: Molly McMillin 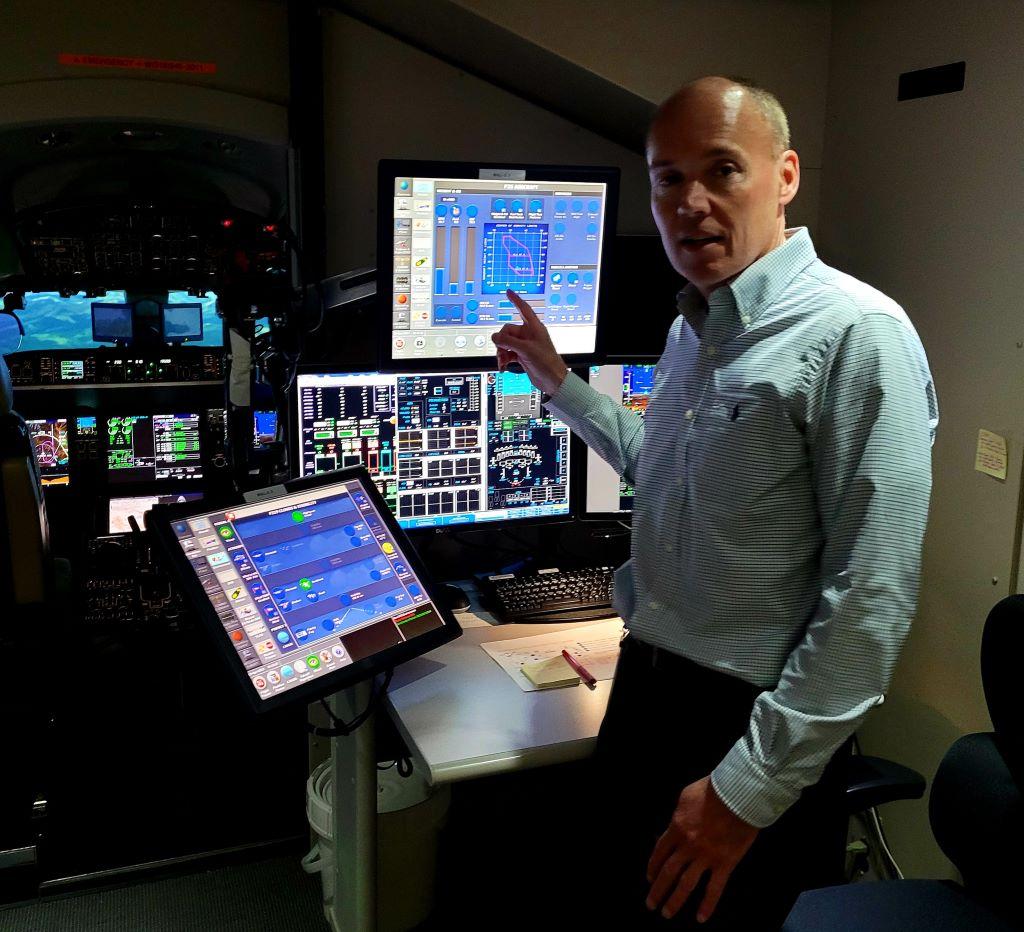 First The Sim, Then The Aircraft

Anything that affected the flight control handling characteristics of the Global 7500 was tested first on the simulator to ensure it performed as expected before testing it on the aircraft. The simulator was used continuously throughout the program until the aircraft was certified. It is now used from time to time for a variety of Global 7500 sustaining projects. Ed Grabman, Bombardier Fellow Experimental Flight Test, was a test pilot on the Global 7500’s first flight. Credit: Molly McMillin 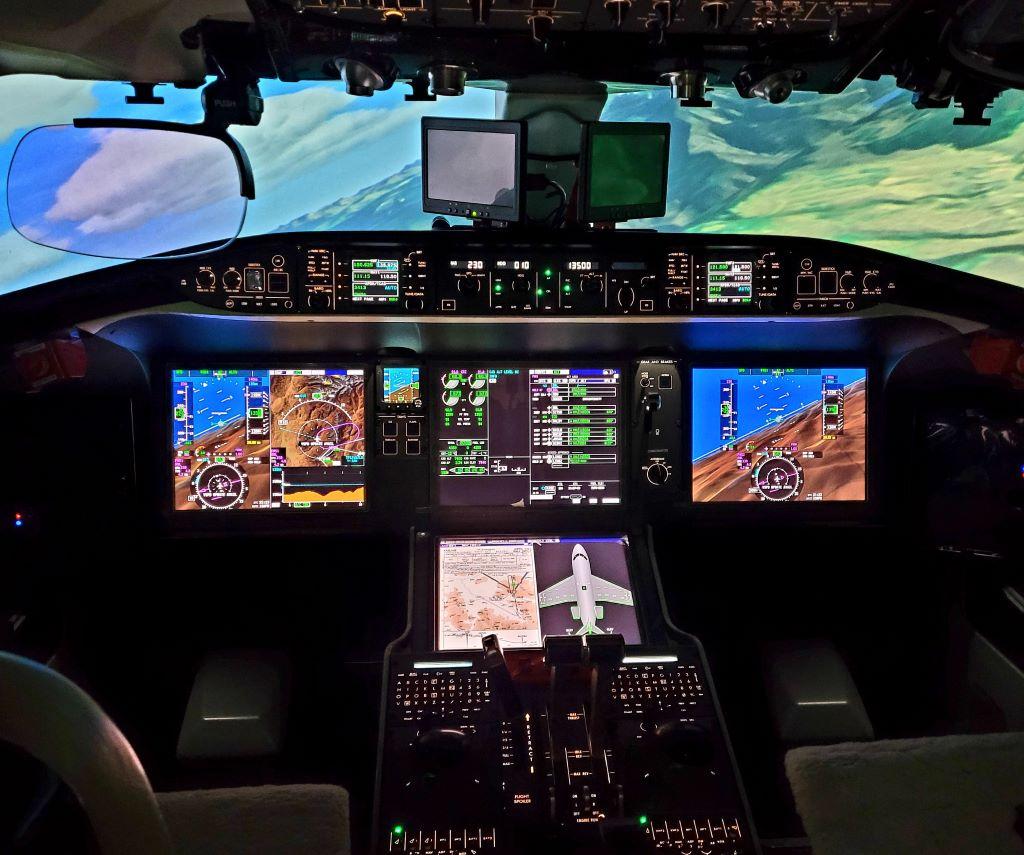 Bombardier’s Global 7500 simulator was put in place about a year before first flight. Here, the simulator is set up to "land" at Aspen/Pitken County Airport in Colorado. It is at a simulated altitude of 3,500 ft. Credit: Molly McMillin

Bombardier announced April 19 that it has designated its Wichita facility as its new U.S. headquarters. The news follows the end of Learjet production and delivery of the final Learjet, a Learjet 75, in March. Bombardier also renamed its Wichita-based Specialized Aircraft division to Bombardier Defense. The company continues to operate a busy flight test center and a growing service center at the West Wichita site. Bombardier employs 1,100 in Wichita with plans to hire nearly 200 more.

Molly McMillin, a 25-year aviation journalist, is managing editor of business aviation for the Aviation Week Network and editor-in-chief of The Weekly of Business Aviation, an Aviation Week market intelligence report.